Fall is sure a fun time for pretty pictures. I enjoy seeing what it looks like around the country as I visit my favorite blogs. There’s a certain amount that’s the same like pumpkins, but everyone has different climates and plants, so what is ordinary for one person is entirely new to someone else (like me). I thought I’d join in and share signs of Fall here in the Northwest and on my little farm.

I was so happy when we bought this house  to finally have one of these plants. (I rarely learn plant names, so I don’t know what it’s called.) When this beautiful bush starts to turn red, I know for sure that Fall is on it’s way. The entire bush will eventually turn bright red, and when it does, it’s absolutely stunning. I’ll try to remember to take a picture of it then. 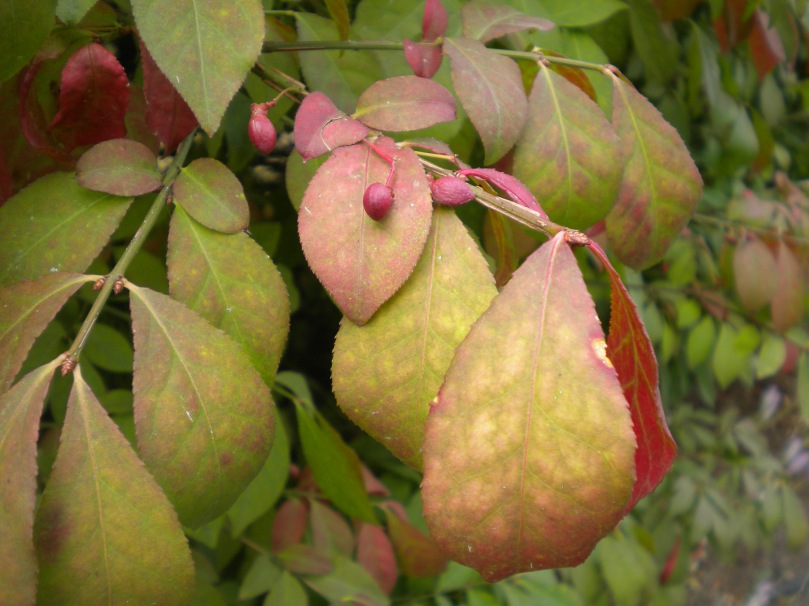 I also don’t know what this flower is either. It’s weird because the foliage grows in the spring and summer. The first time I saw it, I kept waiting for a flower to bloom. Nothing ever did and by the end of summer the long, pointy leaves just  withered and died. Kind of a let down. (You can see all the brown wiltiness on the ground.) Recently, these crocus-like flowers began to bloom. Go figure.

After being a good girl and doing a couple loads of laundry and driving kids around Saturday morning, I stopped by a garden center I’ve never been to. I was overcome by all things Fall. I’m not a gardener by any means, but I did manage to plunk these beauties into my vintage wall decor.

I couldn’t resist this big pot of  white daisies. All I did was wrap a kitchen garbage bag around the pot and drop them into the basket. They remind me of my youngest sister, Becca, who died 14 years ago. 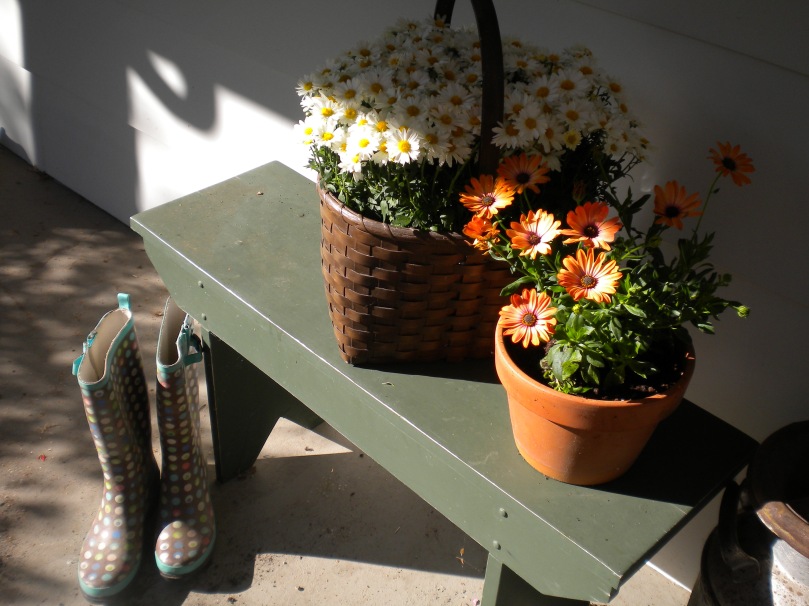 When I saw Lilly sleeping in her usual spot, I thought of the song that Penny sings on “The Big Bang Theory”.

It’s blackberry season, and I’ve been reading lots of posts about the joys of picking berries. I’ve enjoyed looking at cute pictures of little kids picking their first blackberries and delicious berries hanging on the vine.

We have wild blackberries growing along our property line. It’s kind of funny that I’ve lived in Oregon so long with blackberries growing everywhere, but never picked any until last year. My husband was helping me and laughing as I got tangled in vines and yelled “Ouch!” every few seconds. I didn’t realize that wearing shorts and a t-shirt is not the best berry picking attire.

This year, though, I was prepared. I went out this morning in my cute, cut-off, baby blue PJ’s, but added rubber boots and a long sleeve, green checked flannel shirt. I’m sure I was a sight for the neighbors. The goats have eaten most of the bushes, but they left plenty of juicy ones that were up high. 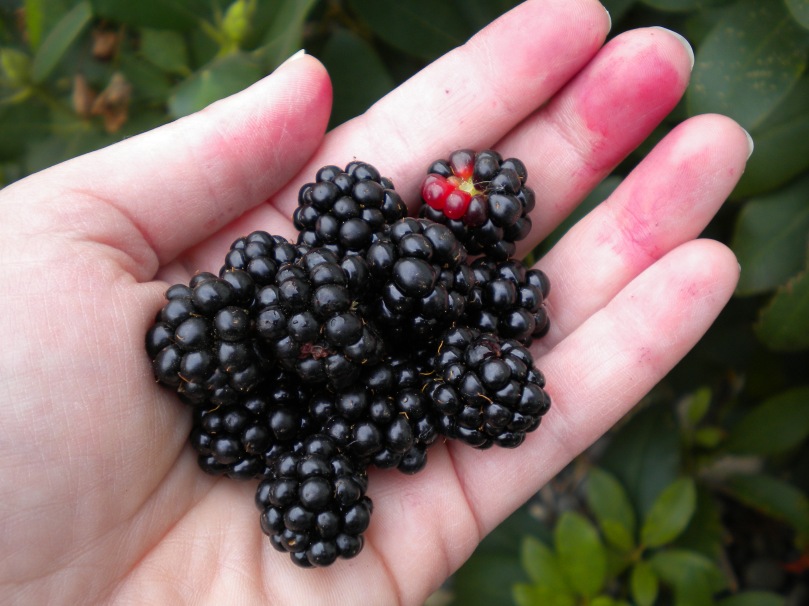 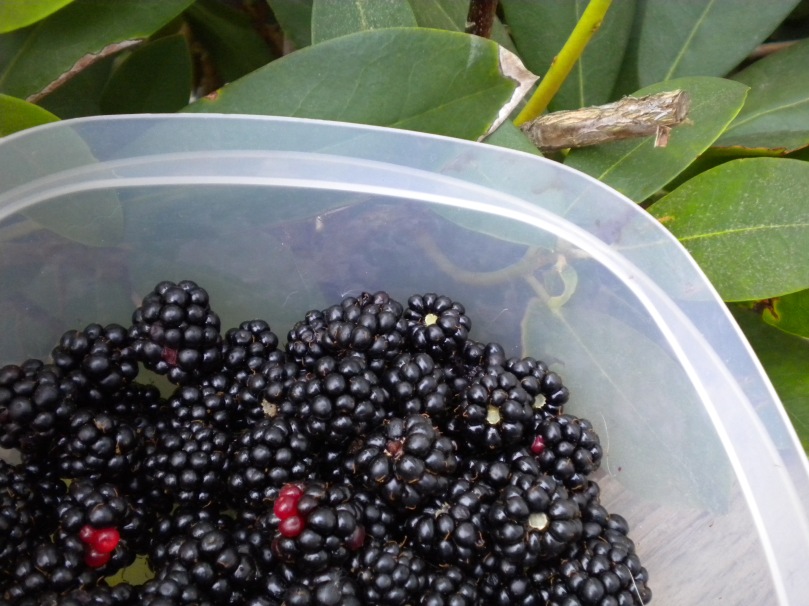 I squished some through a sieve to make instant blackberry syrup for my pancakes this morning. I froze the rest for a yogurt smoothie for tomorrow’s breakfast. Mmmm….can’t wait!

My husband just read my last post and told me a story about my brother that I don’t remember hearing. The details are a little sketchy, but I think I can tell enough of it correctly. (As long as my brother never reads my blog, there’s no one to dispute me, anyway.)

Apparently, my brother and his girlfriend were traveling in Hong Kong (or some other Asian city). They were waiting in a big crowd and couldn’t get through. (I’ll make something up now. Let’s say they were going to a concert.) He got tired of the wait/crowd and yelled out, “I’ve got SARS!!” The crowd parted like the Red Sea, and they were on their way.

By popular demand (ok, one person), I’m going to share one of my delightful personality quirks – speaking with an affected accent.

The English accent is my most common. I’ve read  A Little Princess by Frances Hodgson Burnett to my youngest daughter with my English accent. I attempted Harry Potter the other day, but there were too many different characters, and I felt confined by the movie. The English pronunciation of words just sounds more refined. Which sounds better – schedule or shedule?  Tomato or tomawto? I’ve been known to greet my children when I get home from work with a hearty “Hello, Dawling!” instead of the more mundane “Hi kids!” My kids made fun of me for awhile, but eventually they succumbed. I love hearing them speak with their own delightful accents.

My former coworker mentioned once that he had attended an English boarding school. He said he picked up an accent when he was there. Since he didn’t speak with one, I wanted to hear his. He begged off saying that he couldn’t remember how. I immediately disagreed and responded, “How hard is it? All you have to say is Oh, dear. I’ve burned my crumpets!” My coworker doubled over in shock and laughter at my accent.

I’ve also attempted a French accent. I was talking with my coworkers how I wished I’d learned French in high school. Then I could say things like,”Oh, Da-ling! I want to hug and kees you all ov-air!

I tried an Eastern Europe type accent, but I’m not so good at it. My youngest has started speaking with a Southern accent. She especially enjoys speaking like a Southern preacher.

My brother and his girlfriend were able to get into an exclusive dance club when he pretended to be visiting from England. He spoke in an English accent and convinced the bouncer to let them in. (He also pretended to be deaf once and wiggled his fingers to his friend. People thought he was the real deal.) We took a trip to the beach with him once and he read the Davinci Code to us on the drive home. He was reading Agent Sophie Neveu’s lines in a male, French accent until we informed him that Sophie was a woman. He suddenly switched to a higher voice and continued on. It was quite the sex change.

Obviously, Icome from a family of quirky people.

My husband and I weren’t far into our walk this morning before I found a reason to stop. Growing by the side of the road were beautiful, delicate sweet peas. Even though they were growing amid wild blackberry bushes on a steep downward slope, I decided to gather enough to make a bouquet when we got home.

Although I tried to be careful, I was getting plenty of scratches. At one point I had to stop and pull out a large thorn from my leg which then proceeded to bleed. Man, I really wanted those flowers! After awhile, a couple of analogies formed in my mind. 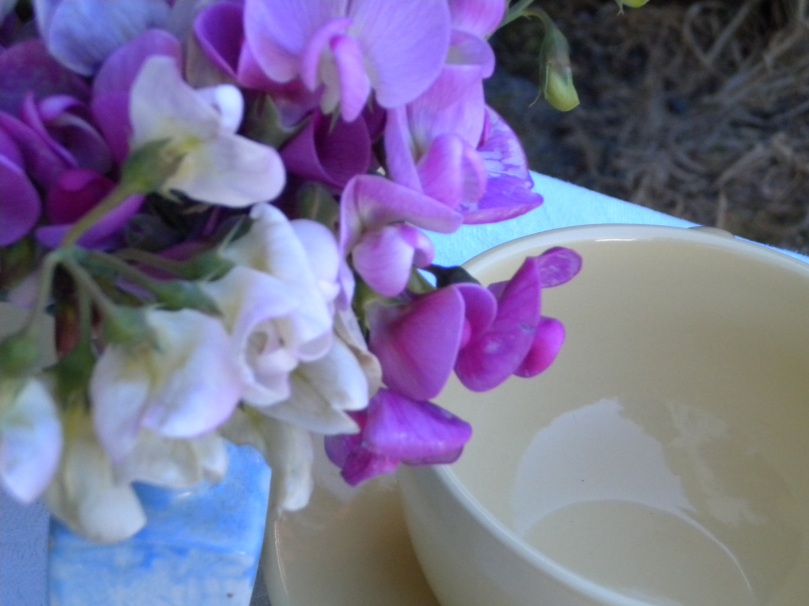 I began to think how life is like my quest for those beautiful flowers. There is so much that is worth wading through thorns for. I thought of the pain I was willing to go through to have each of my precious children. 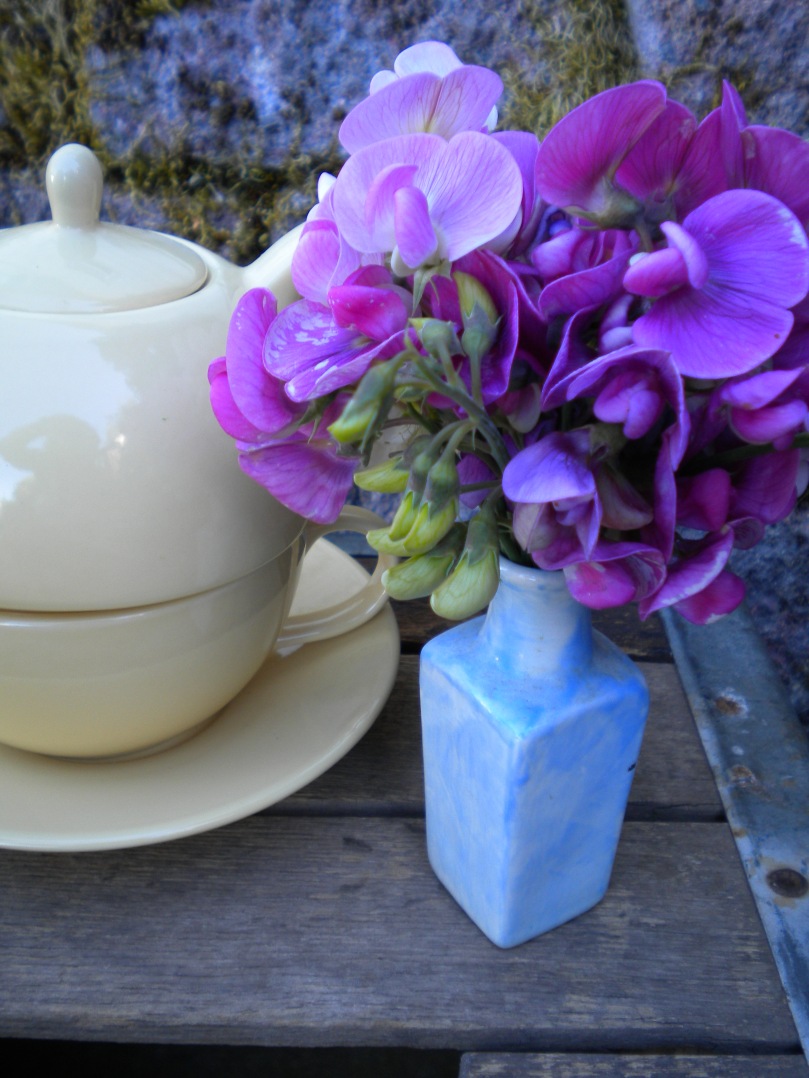 I thought of the Gospel of Jesus Christ. Life can be full of pain and hardships, but a loving God gave us the Gospel to bring joy and beauty to this life and in the next. 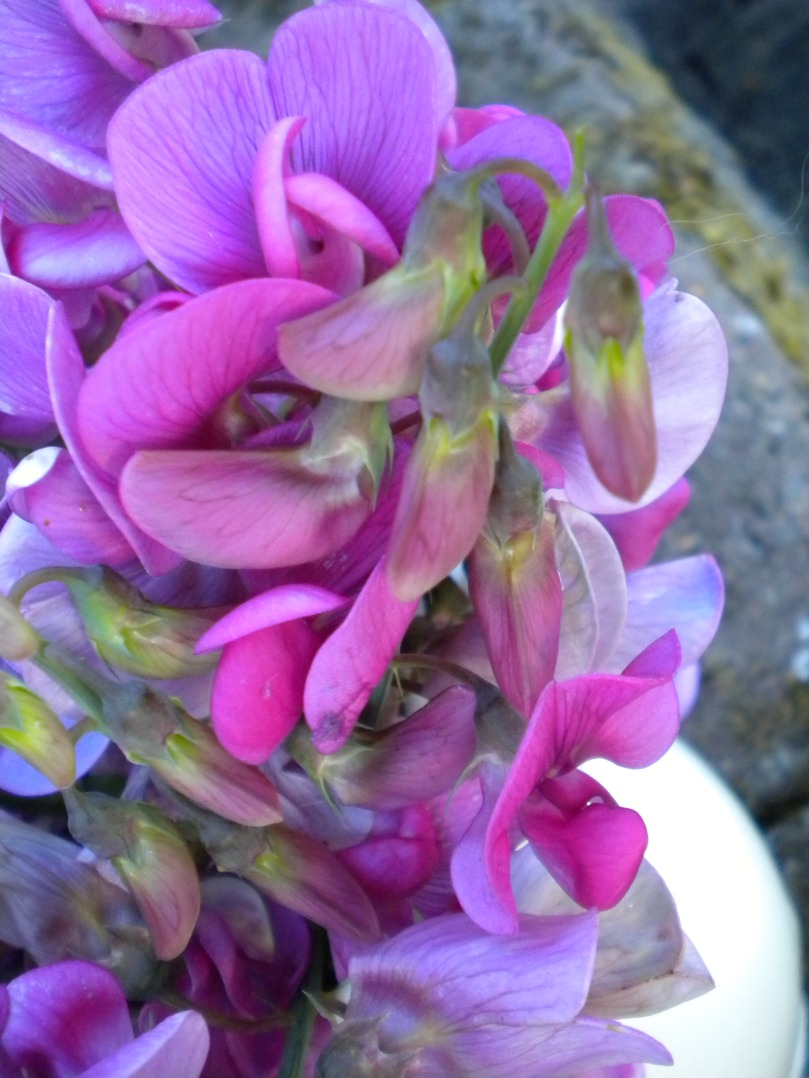 I have been given more flowers than I can hold.